What are eye floaters

Eye floaters are spots that appear in a person's field of vision. They are usually small and semi-transparent and are most noticeable when you look at a white background. When you move your eyes, floaters seem to scoot rapidly across your vision.

When the eyes are still, the spots appear to drift slightly. They may be visible when the eye is in some posi­tions but not in others.

Floaters come in differ­ent sizes and shapes and are most common in near-sighted and older people. Some people see only a few spots while others see many.

Floaters are usually harmless, particularly if they appear as small, elu­sive specks. 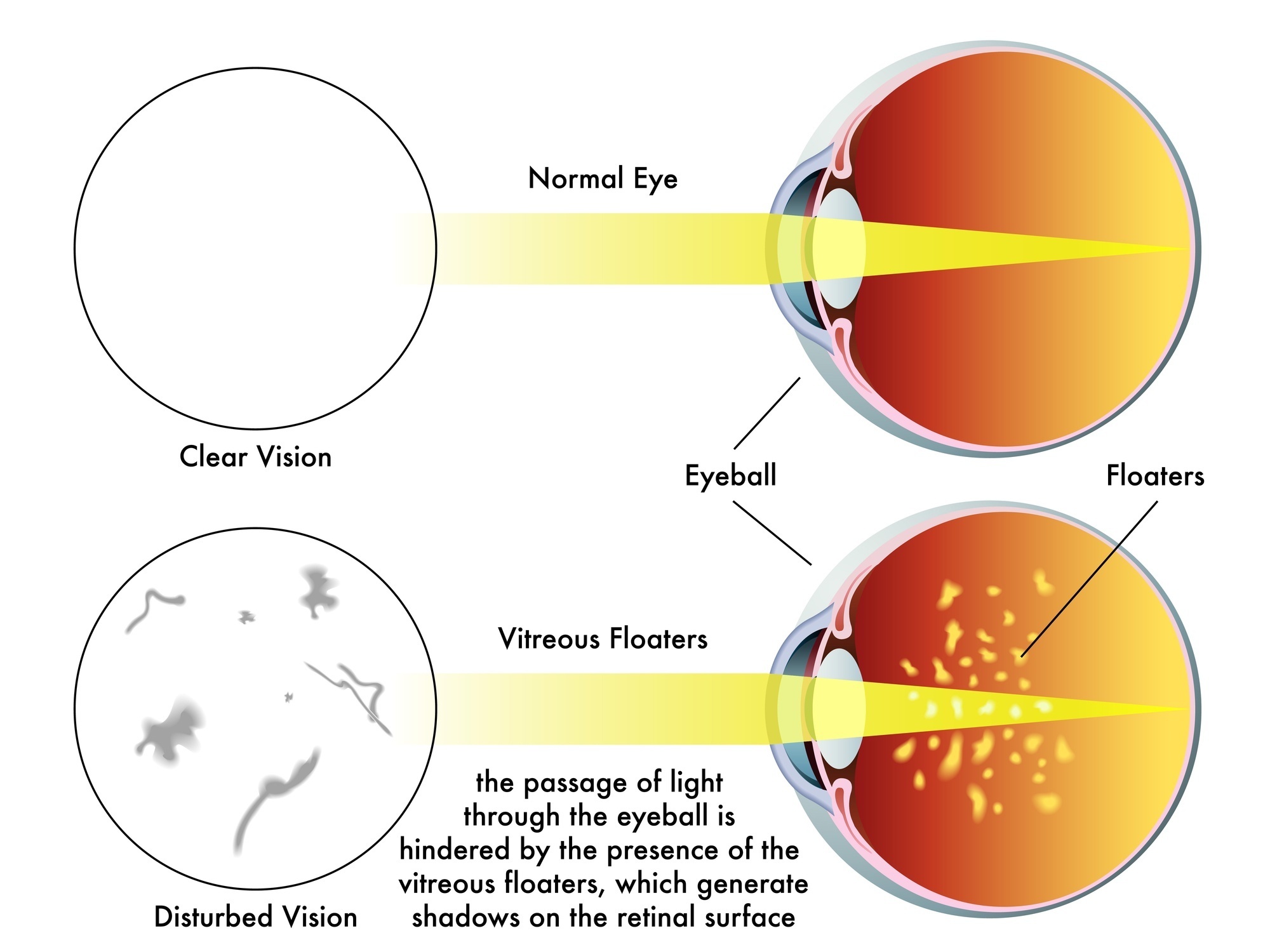 Debris floating in the vitreous fluid, or a thicken­ing of the fluid itself, blocks the incoming light rays and casts a shadow on the retina. This shadow is perceived as a floating spot in the field of vision.

Floaters that are present from birth appear when minute embryonic struc­tures enter the vitreous body during the develop­ment of the eyes within the growing foetus.

By middle age, however, the gel may pull away from the retina and cast shad­ows on the light-sensitive retinal cells, causing the appearance of floaters.

Seeing a spot, or spots, before the eyes.

Apparent movement of the spots that may or may not parallel eye movement.

Sometimes, fibres of connective tissue or other debris may be present in the vitreous body for years but remain unno­ticed until the vitreous gel starts to collapse with age. The changing shape of the vitreous body can move this debris into the field of  vision and so produce ob­vious eye floaters.

As the vitreous body shrinks, it pulls on the retina and may cause it to tear, creating a hole. Reti­nal holes usually form near the outer edges of the eye­ball. If the retina tears, its debris - blood cells and retinal pigment cells - en­ters the vitreous body and leads to the sudden ap­pearance of large numbers of floaters in the vision.

A retinal hole can occa­sionally precipitate retinal detachment (the separation of the retina's light-sensi­tive inner surface from its outer layers). The first symptoms of retinal de­tachment are bright flash­es of light at the edge of the field of vision accom­panied by floaters.

Sometimes floaters may be caused by vitreous haemorrhage - bleeding in the vitreous body, general­ly due to rupture of tiny blood vessels in the eye. In these cases, the floaters appear as brown or red spots. The blood may float in the vitreous body and blur the vision, appearing as a clump or spot.

Another cause of floaters is inflammation of the retina or of the iris, the middle membrane of the eye that contains numer­ous blood vessels and gives the eye its colour.

What can I do to avoid eye floaters

No measures can be taken to avoid eye floaters.How are eye floaters diagnosed and treatedTo establish the cause of eye floaters, the doctor will examine your eyes.

The goal of the exami­nation is to establish if eye floaters are due to vitreous bleeding, retinal detach­ment, or inflammation of the iris. These conditions require treatment, which will differ depending on the individual cause.

If floaters are not due to such conditions, they are normally harmless and do not require treatment.

When should I see my doctor

See a doctor if eye floaters appear suddenly, if they turn brown or red, if their number increases abrupt­ly, or if they interfere with your vision.

Do eye floaters worsen with age

Floaters present from birth usually remain stable throughout life. They are in fact all that is left of a network of veins which occupied the vitreous cav­ity before birth and, as such, are entirely normal.

Those that appear later in life due to changes in the vitreous body, may lessen or disappear within weeks or months.

If the floaters are caused by mobile par­ticles or debris, they may move and the visual dis­turbance they cause may disappear. Some floaters, however, remain indefi­nitely although, as time goes by, people tend to adapt to the condition and notice them less.

When floaters are caused by a small tear in the retina, they may last only a few days until the debris from the tear has cleared. Sometimes, how­ever, they may persist for a period of months.

If the retina is becoming detached, vision eventual­ly begins to disappear, usually starting at the edges of the visual field and gradually contracting. Loss of sight may not begin until a few days or even months, after the first floaters appeared.

In many cases they are not. However, they may be a sign of the onset of a con­dition that warrants prompt medical attention, or of complications of an associated disorder like high blood pressure or di­abetes mellitus, that needs careful monitoring.