It was probably the Romans who first used "traffic signs" in Britain. They marked off road distances at one thousand paces (about one mile) with stones called "milliaries".

Most early signposts were erected by private individuals at their own expense. A law passed in 1648 required each parish to place guide posts at its crossroads, but it was not until after the General Turnpike Act 1773 that these "guide posts" or "fingerposts" became more common.

During the second half of the nineteenth century, bicycles became more popular. Steep hills and sharp bends were very dangerous for early cyclists, and "danger" and "caution" signs were erected at the top of steep hills. Signs showing skull and crossbones were erected at the most dangerous places. Local authorities and cycling organisations installed an estimated 4000 warning signs.

The year 1896 heralded the era of the motor car, and some motoring associations took up the business of placing signs. The Motor Car Act 1903 made local authorities responsible for placing certain warning and prohibitors signs.

The signs were for crossroads, steep hills and dangerous bends. "A" and "B" numbering of roads was introduced in 1921, and these numbers were shown on fingerpost-style signs alongside the destination and distance. Town or village name signs and warning Signs for schools, level crossings and double bends were introduced at the same time. 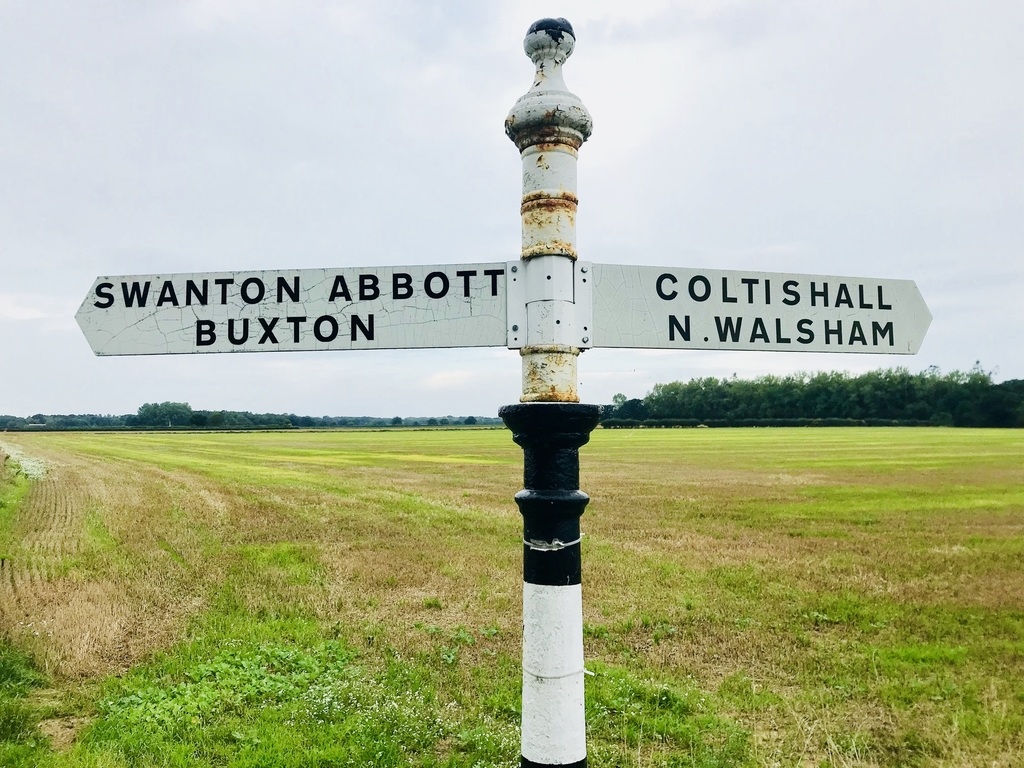 The main task of signposting our roads during the 1920s and 1930s still fell on the motoring organisations, but in 1931 a committee chaired by Sir Henry Maybury was asked to recommend improvements to the signing then in use, and by 1933 further new signs began to appear, including "No entry" and "Keep left" signs, warning signs for narrow roads and bridges, low bridges, roundabouts and hospitals.

THE BIRTH OF THE HIGHWAY CODE

A code of good manners to be observed by all courteous.and considerate persons' is how the very first Highway Code, issued in April 1931, was described by the then Minister of Transport, Herbert Morrison.

The Highway Code emerged from legislation that had been introduced to curb the appalling death toll in traffic accidents on Britain's roads.

In 1931 there were only 2.3 million vehicles on Britain's roads, yet 7,000 people were killed in road accidents - almost twenty lives lost every single day. Today there are over 30 million vehicles on the road, yet the annual death toll has fallen to less than 3,500, with the general trend being toward fewer fatalities.

Many of today's innovations in vehicle design have  been  introduced, of course,   to   comply with government legislation, the appearance of the first motor car on Britain's roads in 1894 having prompted almost immediate government involvement.

Prior to that first excursion by a two horsepower Benz, the only horsepower witnessed on British roads had been expended by real horses. The horses were occasionally terrified by steam contraptions of various types until people saw the comparative ease with which a petrol-engine car could be operated. Steam power on the road soon became a thing of the past.

The legacy that steam carriages left behind was a sheaf of regulations such as the infamous Locomotive Act of 1865. Known as the 'Red Flag Act', it originally limited the speed of powered vehicles to just 2 mph in cities, towns or villages and 4 mph elsewhere.

It also required that the vehicle be manned by three people and that a pedestrian walk sixty yards ahead carrying a red flag to warn other road users of the vehicle's approach.

In 1895, vehicles weighing less than three tons were exempted from the Red Flag Act and the speed limit was raised to a giddy 14 mph in some areas, but it quickly became clear that further regulation of motor vehicles would be required for the safety of all road users.

In January 1896, a Mr Arnold of Kent was the first person to be prosecuted for speeding. He was fined one shilling (five pence) for hurtling through a 2 mph zone at an outrageous 8 mph. Mr Arnold's fine was not too harsh, even when put into context with the average weekly wage for a skilled worker at the time of a little under £2 per week.

By 1899, however, speeding motorists had to be wary. In Brighton, a Mr Jeal was prosecuted for driving at a speed that was deemed wholly inappropriate for the traffic and road conditions. He was fined £3 plus court costs or offered the alternative of three weeks in jail. The police reported that he had been travelling at a shocking 12 mph, the court pronouncing that no one need ever travel through Brighton at more than 4 mph.

In August 1896, forty-four-year-old Bridget Driscoll became the first pedestrian in Britain to be killed by a motor car. She was on her way to a dancing display at Crystal Palace, when she was run over by a Roger-Benz car.

At the inquest into her death, witnesses claimed that Bridget had been startled by the car and froze as it approached at a speed of at least 4 mph, although the twenty-year-old driver was accused of having modified the engine to produce up to 8 mph. An expert proved this to have been impossible.

Under the Motor Car Act of 1903, all vehicles had to be officially registered and had to display their registration marks, in the form of licence plates, in a prominent position. The annual registration fee was £1 for a car and 5 shillings for a motorcycle. Around the same time, the driving licence was introduced.

There was no requirement for anyone to sit some form of aptitude test in order to obtain a driving licence. Neither were there any eyesight or medical tests. All you had to do was pay the annual fee of 5 shillings (25 pence) at your local Post Office.

The minimum driving age was fourteen for motorcyclists and seventeen for all other vehicles. No driver, whatever his or her age, needed to show any knowledge of either the law pertaining to road users or the newly introduced road signs.

The Motor Car Act had made provision for local authorities to erect road signs, standardizing the hollow red triangle as a hazard warning, the solid red circle to show something that the road user was prohibited from doing and the hollow white circle to indicate a speed limit. Motoring organizations, notably the AA and RAC, also erected road signs, as did cycling clubs, leading to a confusing proliferation of signs by the roadside.

As motor cars began to be mass-produced, they became more reliable, and faster, with a consequent increase in the accident rate. The London Safety First Council (which would develop into the National Safety-First Association and later the Royal Society for the Prevention of Accidents) was established in 1916 in response to the marked increase in road accidents due to the reduced level of street lighting.

There was a proliferation of vehicles on Britain's roads in the new, modern age following the end of the First World War, leading to greater competition for road space and, in the case of bus drivers, fierce competition for passengers. During the 1920s, 'bus races' were the cause of many accidents.

Drivers from rival companies sped through the streets, even forcing each other off the road, in order to be the first to pick up passengers.

As a response to the growing anarchy on the roads, the Road Traffic Act of 1930 gave local authorities powers to regulate bus services, made it against the law not to have your vehicle insured and required the Ministry of Transport to prepare guidance for all road users in the form of the new Highway Code.

Other signs followed during the 1930s, including "Halt at major road ahead". These formed the basis of our traffic signing until the early 1960s.

It was not until after 1918 that white lines began to appear on British roads, and during the 1920s their use spread rapidly. In 1926 the first Ministry of Transport circular on the subject laid down general principles on the use of white lines. In the 1930s, white lines were used as "stop" lines at road junctions controlled by either police or traffic lights.

Reflecting road studs (often referred to as "cat's eyes") first came into use in 1934. By 1944, white lines were also being used to indicate traffic lanes and define the boundary of the main carriageway at entrances to side roads and lay-bys, and in conjunction with "halt" signs. In 1959, regulations came into effect to control overtaking using double white lines.

Up until 1958, road signs in Britain were mostly a slapdash series of roadside posts of various sizes, colours and type fonts. Originally, these early signs were designed to be read by the drivers of horse-drawn carriages, and later by early, slow motorcars.

As technology advanced and cars became quicker, it became increasingly difficult for drivers to identify and accurately read the mish-mash road signs.

It was realised that the old system of signing would not be adequate for motorways, and the Anderson Committee was set up in 1958 to consider new designs.

Assuming you’re not severely visually impaired, you’ll be familiar with Kinneir and Calvert’s work. After all, you more than likely see them every single day of your life, and the chances are that you’re no more than several feet from one right this second.

The 1950s also marked the decade that the automotive industry started to manufacture cheap, more widely affordable cars. Suddenly, it became more cost-effective for families to ditch the railways in favour of a car, which caused traffic in the UK to surge.

Massive construction projects, which would eventually birth the first true motorways in Britain, were started to cope with the swell in traffic, with drivers now needing to be able to read where they’re going faster than before.

It recommended much larger signs, with blue backgrounds. Then, in 1961, the Worboys Committee began to review the complete system of traffic signing. 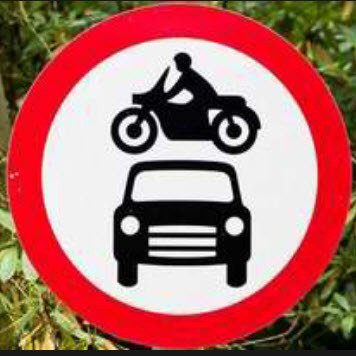 It concluded that the UK should adopt the main principles of the European system, with the message expressed as a symbol within a red triangle (for warning signs) or a red circle (for prohibitions). Work began on the conversion of British signs in 1965, and this is still the basic system in use today.

Later developments include the use of yellow box markings at busy road junctions, special signs and road markings at pedestrian crossings, mini roundabouts and bus lanes.

Regulations published in 1994 included new regulatory and warning signs and simplified the yellow line system of waiting restrictions that was originally introduced in the 1950s. Further Regulations were published in 2002.